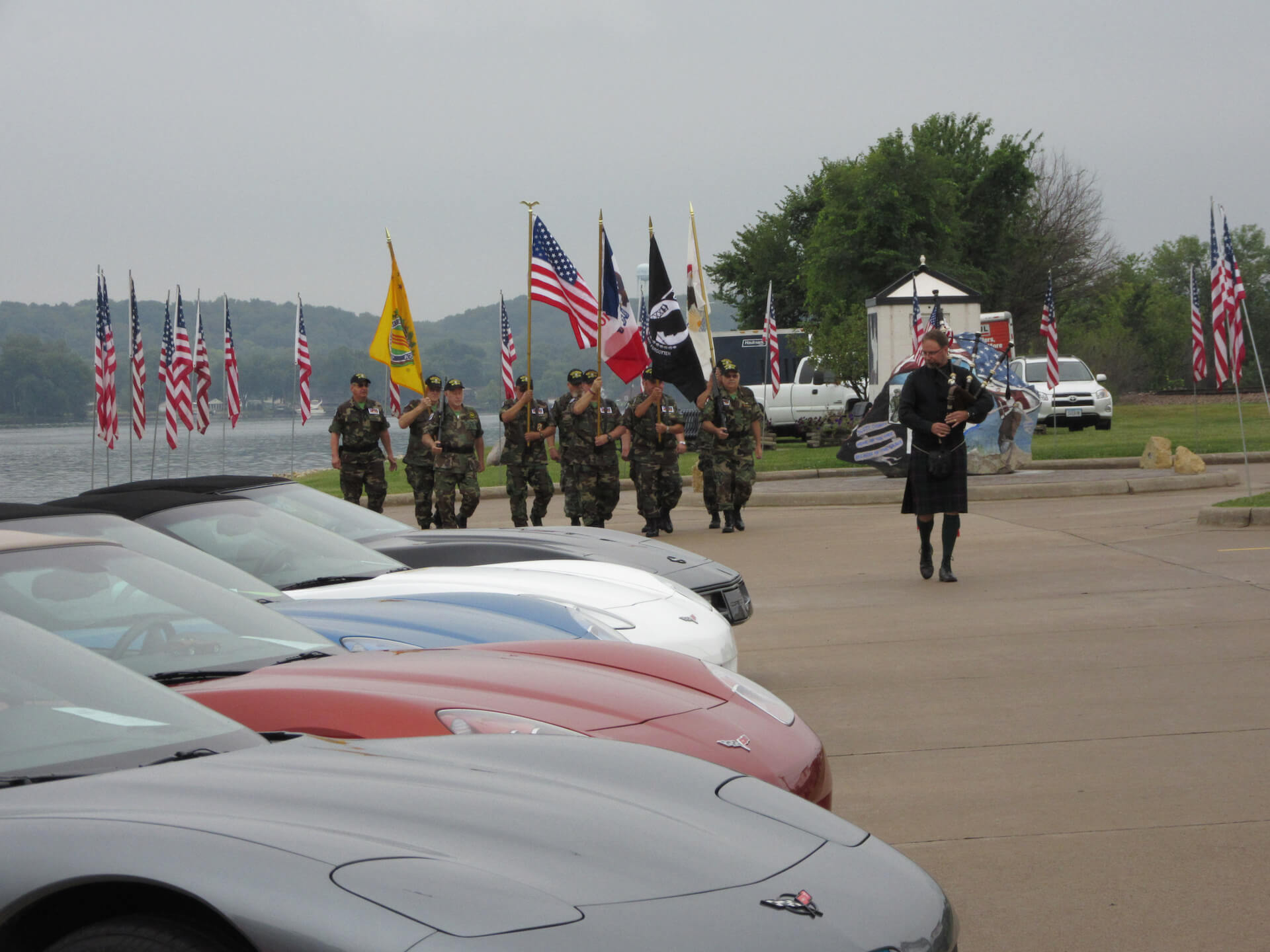 Vettes On The River is an all-Corvette car show. All proceeds from this annual event are donated to local Quad Cities Veterans organizations. Corvettes come from all over the country to gather along the Mighty Mississippi River in LeClaire, Iowa and show off their pride and joy all while supporting our Veterans.

I believe it was around mid-day on August 29th of 2015. I was sitting at a picnic table on the Le Claire Iowa Levee outdoor pavilion. The morning light rain had finally left the area and I was enjoying the live music, my pork tenderloin sandwich, all the Corvettes on display, and feeling very proud to be a member of the host club Mid-West Corvettes, Inc. An officer from one of the other clubs in attendance came up to me and asked me a simple, straight forward question… “What’s your secret?” How do you put on such a successful Corvette car show and fill the Levee with 262 Corvettes from 35 regional Corvette clubs and non-affiliated Corvette owners. (It’s no secret that rain, and Corvettes usually don’t make for a great car show turn-out.) So I turned to my Corvette Club counterpart and had a quick answer. You’re surrounded by it!!! I really didn’t have to expound on my answer as I could see he knew what I was talking about as soon as I said it.

The Levee In Le Claire

In my opinion, Le Claire Iowa has one of the best locations to have a car show. One would have thought they had built the levee for that specific purpose. The proximity of the Levee to the Mississippi River is literally a few feet away and the views are unobstructed and magnificent. As you turn away from the river, you can see all backsides of the Merchant stores and Restaurants which typically have decks for patrons to sit and enjoy the Levee from an elevated perspective. The main street is a short walk from the Levee so you can park your Corvette, and visit a River City that can satisfy hardcore shopaholics, and you can choose from a wide variety of dining establishments. But the location alone would not have been as perfect if it were not for the City Officials, the Levee Board, and the merchants. They were “all- in” lock-step partners in their support of this event.

But like many car shows, it had to start somewhere and ours started in 2010. My wife Jane came to me and observed that our Mid-West Corvette club, while doing a great job of creating charity events to raise funds for our local Children’s Charities, did so on our own and mainly kept to the confines of the club. She suggested we attempt to interact with another Corvette club and share each other’s successes and ideas. I said “go for it” and she contacted the Cedar Rapids Corvette club and they were all for having a social meeting. Each club got as many of their members as they could together and we each planned our own drive-outs that would end up in the Amana Colonies, Iowa for lunch and a “meet and greet”. Our club had 9 cars and the Cedar Rapids Corvette Club had 14 cars… Needless to say we had a great time, shared our event ideas, and admired each other’s Corvettes. Parting ways, both clubs felt good about the interaction.

2013 came quickly, and that year the Cedar Rapids Corvette Club was celebrating their 50th anniversary and was busy planning their own club celebrations. They were happy to let us take on the event again, so it was decided to take the event back up to the Dubuque, Iowa Grand Harbor with one major addition. We invited the Key City Corvette Club to co-host the event with us as the event was being held in their City. They were exited to co-host and it was another great interaction with a club that, although they had never put on such an event, had the energy and creative enthusiasm that we are still using many of their ideas and procedures at our current event. The power of interacting with other clubs proved to strengthen and secure the success of the event. That year we invited 27 Corvette Clubs and had 237 Corvettes… and they just kept coming…

In 2014 we came back to the confines of the Le Claire, Iowa Levee as it appeared the car show was hitting its stride so we started adding activities that would keep our participants interested and sharing their experiences with their club members and Corvette enthusiasts. Our charity fund-raising focus changed to help our local Veteran organizations and make our Veterans the cornerstone of the car show. One of our core committee members suggested the Vietnam Veterans Gateway Chapter 776 located on the Iowa side of the Quad Cities. These organizations are not typically federally funded and 100% of the donations collected would be presented directly to their chapter and used locally to help our Veterans. They performed a Color Guard Ceremony which was very patriotic and appreciated by all who attended.

We also added a NASCAR Racing Simulator to our activities. The best way to describe this activity is you would get into a full-size race car that uses hydraulics, and race car simulation video screens inside the car… simply put, it puts you into a simulated NASCAR race… If you don’t watch your gauges you can even blow the engine and smoke will billow out of the engine compartment. The weather was great; we invited 32 Corvette Clubs and had 257 Corvettes participate (almost filling the Levee). We were able to raise $7,000 for the Veterans at this event and we found a special and honorable way to combine our passion for Corvettes and show respect and admiration for our Veterans. This was also the first year we had a Corvette owner that shows his car as the “Riding with Private Malone Car” and invited any Veterans to come and sign the hood of his Corvette… truly a grand and sincere gesture… and they just kept coming…

That brings us to Vettes on the River 2015 (VOTR 2015). The City of Le Claire wanted us back and the feedback from our participants told us they loved the venue so why would we change a working combination. Our core committee started in March and worked tirelessly to put together another awesome car show. This year we added a live band, expanded the Color Guard Ceremony to include a Bag-piper which again, was a very special, moving experience. We added a drone which took amazing shots of the event and the Color Guard Ceremony, and the NASCAR Simulator was back by popular demand.

As I mentioned at the beginning of my story, a light rain came and went all morning. This year we had invited 35 Corvette clubs. The wet weather usually has a negative impact on Corvette car show attendance, but they just kept coming, and when the official Corvette count came in at 262 Corvettes, I finally came to realize, it’s not just one or two things that make this event popular… It is the combination of the location, the City of Le Claire’s support and friendship, the commitment of the 12 core VOTR committee members, the 50 plus Mid-West Corvette Club volunteers (we affectionately named them the VOTR Pit Crew) that keep the wheels turning the day of the event, the Veterans, our sponsors Eriksen Chevrolet and Ron’s Toy Box & Duck Creek Tire, and especially all the Corvette enthusiasts that make Vettes on the River a success. This year, I am proud to report we have raised $9,000 for the Vietnam Veterans Mississippi Valley Memorial Chapter 669 on the Illinois side of the Quad Cities.

For VOTR 2016, our event planning will again start in March… Our core committee is looking forward to creating another exceptional Corvette car show hosted by the Mid-West Corvette club. We’re planning more activities, more trophies, a new live band, and of course we will be selecting another Veterans organization to honor and show support. We have penciled-in next year’s VOTR for Saturday, August 27, 2016 with the Le Claire, Iowa Levee as our location. Our challenge is to “fill the Levee”. If you wish to get on our e-mail distribution for VOTR 2016 future updates, please e-mail us at vettesontheriver@gmail.com